Q: Who are study participants?  A: 20 patients in all cohorts.

Discussion:  When you are an engineer they tell you to check the quality of large population of parts by drawing at random sample size of at least 30 parts from given batch.  I worked for Dental X-ray equipment manufacturer who recommended smallest sample size for clinical test to be 30 patients. At 20 we are not exactly ready to validate the 80/20 break down in general population by Phase 2a study.  Stay tune to Phase 2b/3.

Q: Who are ANAVEX 2-73 Responders?  Here we have to turn to the part of PR given here: 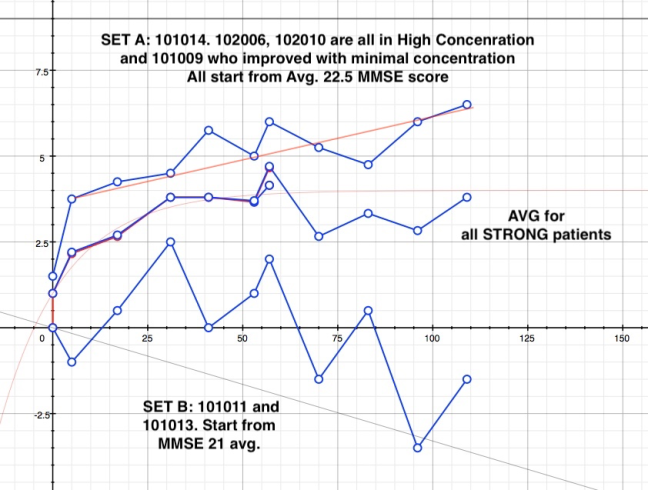 The sample size is too small to have definitive iron clad trend as one measure of improvement only partially confirms the results of other.  That is why the 148 weeks data by the virtue of “demographics” alone (number of patients staying with the study or not deteriorating) can be revealing of expected future trend in Phase 2b/3.  Vaguely, these probabilities for patients in natural course of the disease and predicted for Phase 2b/3 might be relevant and give insight but with the heterogeneity of humans the results from Phase 2a (148 weeks) and by extension Phase 2b/3 might differ to a degree.

Probabilities for a AD patient to find himself/herself in one of four classes on timeline of 6 year in natural course of disease.

Notice that on purely demographic terms at 3 years population with No Decline practically disappears.  Let’s see what Phase 2a 148 weeks data tells us.

The same for modeled Phase 2b/3 based on the very “imperfect” date released till now by the company and assuming The High Concentration Cohort is representative of general population.

On a second thought….

A similar combination of patients approximating the parameters given for the ANAVEX 2-73 Responders can be made: